Where your pets are family!

Click here to learn about how we are responding to the COVID-19 crisis. 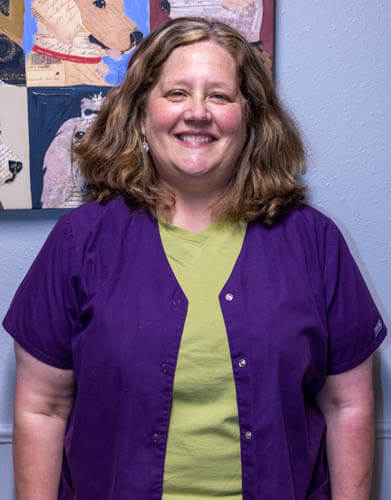 Dr. McKee was raised in a military family and lived in several states and Europe before her family landed in the Puget Sound area in 1976. She attended Washington State University and graduated with a Bachelor’s degree in Zoology in 1984. She returned to WSU to pursue veterinary medicine and earned her DVM in 1994. She has practiced small animal general medicine ever since. She also practiced in an emergency clinic for two years.

Dr. McKee enjoys behavior medicine, animal husbandry, emergencies and wound management. She loves to educate pet owners about animal health and has particular interest in fostering the bond between a pet and its people.

When not at work, Dr. McKee can be found roaming local trails and beaches with her English Setter, Monty, and her Gordon Setter, Reggie. She actively trains her dogs for obedience, rally and conformation shows and has dabbled a little with agility training, too. Dr. McKee has been an avid horse owner for decades and currently co-owns three horses and two mini mules.